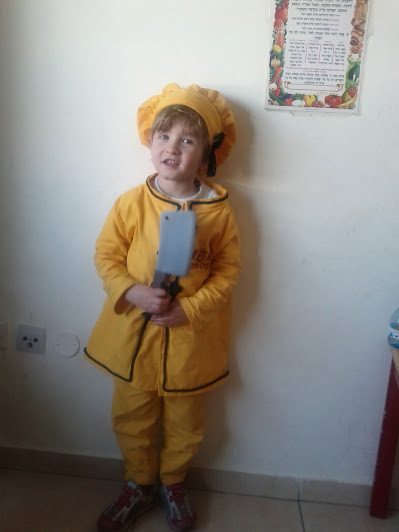 dhole has a new story up at Abyss & Apex:

I think it's pretty good.

No, I'm not going to be there.

But my comics will!

Y'all may remember Bento Comix, the comics I drew for Uriel's bento box and occasionally put up on the web. Well, I took one of those stories and polished it up a bit, and now real gone girl studios (who is, full disclosure, my sister

murmbeetle) is publishing it as a minicomic under the title Bento Comix: Ghost Girl vs the Mean Medium. And they will have it available at New York Comic Con this weekend, at table S9 in Artist Alley. 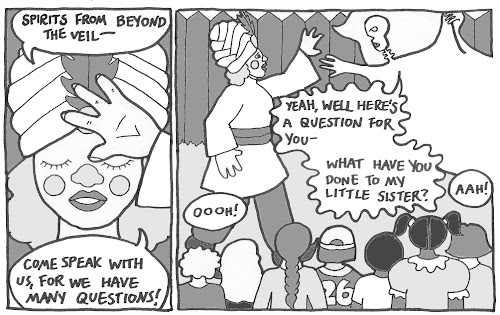 Check it out! And while you're checking it out, check out the other fine products of real gone girl studios.

We're at my parents' house in Ashkelon (the Iron Dome seems to be working out pretty well so far, thank you) and

joshbrown was over for Shabbat. The following conversation ensued:

joshbrown: Did you know that they tried using gerbils in airport security? Because they can smell fear, so what they did was they took a fan . . .

My father: But it must work only at a very short range. Surely a more effective way to do it would be to have the passengers take off their clothes and climb into a box of gerbils . . .

Israel looms much larger than its actual size in the international imagination. But how much do people living abroad know about the issues that are closest to Israelis' hearts?

A case in point: Although it was the top story in today's Hebrew papers, I couldn't find any articles in English about the triumphant end of the great cottage cheese boycott.

Here's a video in Hebrew, though, for those who understand it.

I finally got the Uriel Purim pictures from my parents, and you can see them ( behind the cut.Collapse )

So I keep hearing--or at least I think I keep hearing--that all the Vorkosigan books except for Memory are legitimately available as free ebooks. Is this true? The only one that seems to be in Baen's Free Library is The Warrior's Apprentice. (And "The Mountains of Mourning," which isn't a book, as such.)

I ask because I have a young friend who wants to read Ethan of Athos, but who doesn't actually live near me so I can't just hand him my copy.

I'm okay, and so are

Gosh it's been a while since I've had to do one of these. It's remarkable how much I hadn't missed them.

Ben Drosai, the bandit chief, would take his meals rare
He ate sashimi, steak tartare, and never turned a hair
It wasn't boast or braggadocio
To prove that he was tough and macho
That made him relish beef carpaccio
It was simply savoir-faire

And so, on erev shabbos, with the minutes ticking by
And you'll never finish cooking howsoever hard you try
Just shove your eggplant parmesan
Onto the plata, still half done
And with the setting of the sun
Raise a glass to Ben Drosai

So, about ten years after the rest of the internet, I finally read Cryoburn.

The only part I didn't like was when Miles was showing the holocube of his family to Jin, and there didn't seem to be any pictures of Nikki on it. Really, Miles? Not cool.

Other than that, I liked it. It wasn't a major Vorkosigan novel, but it had the things I'm looking for in a Vorkosigan novel: Miles burning up the page, mad schemes spiraling out of control, at least one line of dialogue that made me cackle madly. (Best one in this book is Mark's: "Fuwa-san, let's talk fire sale.")

There may have been occasionally a bit too much "here's what these characters you care about have been getting up to in the past five years" interrupting the story, but it's a fair cop; I do care about these characters and I do want to know what they've been getting up to. Also, Kibou-daini, not actually terribly Japanese. Eh. It's true, but I don't particularly care.

I liked Jin. I don't remember seeing Bujold do a kid point of view before; it's good. If she decided that what she wanted to write after the Ivan thing was a middle-grades book about the adventures of Jin and Mina, I would totally be all over that. (Similarly, if she wanted to write a cozy mystery starring Ekaterin, as one of the commentators at

james_nicoll's lj suggested, I'd be all over that too. Neither is likely to happen, sadly.)

camwyn, or at least a character played by

camwyn, and I immediately became twice as fond of him, not that I had been precisely unfond of him before.

So, yeah. I'm happy. Aethereal Girl says check it out.

*In fact, when he and Roic were escaping from the NHLL, I was briefly quite taken with the idea of Raven/Roic. The feeling passed, which is not to say that I'd object if I happened to come across some well-done Raven/Roic lying around the internet.
Collapse